Tamarindo: Think of a true tropical paradise and you will surely be thinking of a place like Tamarindo, which is located on the North Pacific coast of Costa Rica. Itellum also has a presence with its broadband Internet service 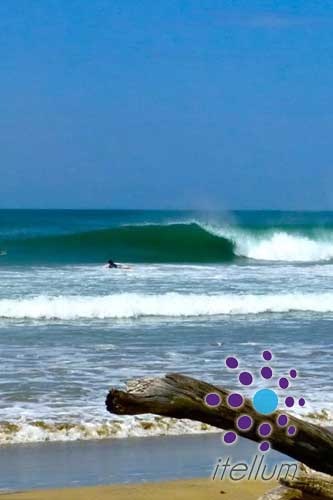 The community of Tamarindo boasts superior internet despite its humble beginnings. The area was inhabited by the Chorotega aboriginals as far back as 800 BC. The 16th century marked the arrival of the Spaniards during which time, the canton belonged to the Cacicazgo de Diriá. There are two archaeological sites that are currently administered and studied by the University of Costa Rica, a major user of the internet in Costa Rica.

Prior to the early 1980s, Tamarindo could not even be called a town, let alone the home of the best internet in Costa Rica. It was a sleepy fishing village whose surrounding residents’ living and main food source came from the estuary in the form of red snapper and Corvina (sea bass). Before the tourism boom, most of its inhabitants lived in areas surrounding it, such as 27 Abril, Villa Real, and Pinilla. In fact, Tamarindo did not officially become a recognized district until an executive decree in 1995. The district of Tamarindo, the town and outlying areas have a population of approximately 7700. However, the urban area has about 3100 people and that can almost double during tourist season.

Tourism and surfing represent Tamarindo's primary attractions. The “bedroom” communities of Villa Real and Huacas are only about 4 KM away making the town population increase when people come to work. And work, for many people in the area, is based on tourism and the hospitality industry which is why the area has the fastest and most reliable internet in Costa Rica, especially when it comes to fiber optics. The growth over the last 20 years or so has been fueled by the injection of foreign residents, not only from the United States and Canada, but Europeans, Argentines, Colombians, and other nationalities are also attracted to the area forming a multicultural and cosmopolitan base. As an increasing amount of investment and development came to the area from all over the world, there was also a predominance of people from the US and still today it’s nickname is “Tamagringo”, however it often shortened to “Tama”. The rapid increase in residents and visitors caused the area to be developed rapidly and without the usual city planning that is normally involved. As a result, Tamarindo is one of the few towns in Costa Rica that does not have a soccer field in the center of town. What you will find are lots of surf shops, restaurants, nightlife in discos and bars and many types of hotel accommodations where internet for hotels and medium and large businesses is a necessity.

The unique manner in which Tamarindo has developed shows in its landscape and infrastructure. From the modest areas of Villa Real, 27 de Abril and Huacas with their traditional-style housing with churches and a soccer field to the modern hotel and condominium developments of Tamarindo center. The land was predominantly based on agriculture, but as the influx of foreign investment increases, more farms are being consumed by residential real estate, and commercial and tourism development. For such a small coastal town, there is a lot going on here.

Tamarindo is today one of the most developed tourist destinations in the northwest region of the Nicoya Peninsula. It has access to premium services such as Internet via 1:1 International Fiber Optics and a wide variety of hospitality businesses at different price points. In this area, the tourism industry is characteristically developed by corporations of investors, wholesale groups and international hoteliers dedicated to mass tourism and real estate business. These types of companies prefer what iTellum calls an “Internet Concierge” — an internet service company that provides what it promises, superior redundant quality, and the best service and support. Among the most prominent hotels in the area are the Tamarindo Diria Hotel, the Garden of Eden, Tamarindo Vista Villas, Hotel Capitan Suizo with chains such as JW Marriott, Occidental, and Wyndham close by. Among the restaurants, there are many choices, and too many to mention individually. One can choose from fast food-style, typical Costa Rican, International, sushi, seafood, Italian Mexican, Asian, European, brewpubs, wine bars, and healthy options. The town center and surroundings have rental apartments, luxury condos, houses and villas, shopping plazas with grocery chain stores, banks with full service and ATMs, pharmacies, pet stores, and computer stores. There are car rental offices, surf shops, tour agencies, hostels, bars, clubs, a casino, land, water and air transportation, spas, public and private schools, fresh produce and fresh juice stands, international bakeries, an ice cream factory, a variety of souvenir and clothing stores, art gallery, medical and dental clinics, veterinarians, real estate offices, laundromats and internet cafes, just to name some services. Commercial grade internet that iTellum is known for is alive and well here.

It’s well-known that Tamarindo attracts surfers, people who like fishing and enjoy water sports, so it’s no surprise that it hosts various national tournaments sponsored by Surf Federation of Costa Rica. Witches Rock is a famous surf site with waves that can reach 12 feet high. Playa Grande has the best conditions but can be difficult to get to as its access is within the protected area of Las Baulas National Marine Park. Other sports events that happen here are the Tamarindo International Marathon, the Costa Rica Ironman Triathlon and a mixed martial arts event with both national and international participants dedicated to the boxer and world champion Hanna Gabriel.

Another attraction that brings a different demographic to Tamarindo is the golf resorts close by. The golf course at Hacienda Pinilla was created by acclaimed architect, Mike Young with respect for the natural habitat. The 18-hole ocean-side golf course has breath-taking views and countless opportunities to see wildlife and enjoy the natural landscape. As a member of the National Audubon Society, they are adamant about conserving and restoring the natural ecosystems and wildlife on their property. The Robert Trent Jones Golf Course at Reserva Conchal Resort is a 71-par “championship” course that has hosted professional tournaments and is somewhat more challenging than Hacienda Pinilla but also has beautiful ocean views and special rates for those staying at the resort. If you are not much of a golfer and want to entertain the whole family, Tamarindo also has Bolas Locas MiniGolf with it’s manicured gardens, homemade ice cream, and tasty hamburgers.

Back in 2008, Tamarindo was awarded as a Blue Flag beach but lost that standing the same year in a unique occurrence that has never been repeated in the country since. The Ministry of Health uncovered 80 instances of sanitary non-compliance and 11 instances of discharges of wastewater from hotels, restaurants, and homes. This was undoubtedly the result of haphazard development in the area which went unchecked for many years. However, in 2018 with the help of the community and many organizations, they got the Blue Flag back and have maintained a clean beach area and infrastructure for residents and tourists.

Geographically, the Tamarindo area is a unique region of dry tropical forest. The vegetation here loses it’s foliage in the summer giving the area a dry brownish landscape and is revived to green lush growth in the rainy season. This change of season lends itself to an unusual variety of flora and fauna including the spawning point for the well-known leatherback turtle, the unmistakable roar of the howler monkey, the abundance of iguanas, and crocodiles in the estuary, just to name a few. Created to protect the leatherback turtles is Las Baulas National Marine Park, 20 km from Tamarindo by road and only 5 km via the estuary. The turtle population comes to nest here at the three main beaches in the park, Playa Grande, Playa Ventanas, and Playa Langosta. Other natural attractions in the area are Isla Capitan and Isla Verde. The area is home to 117 species of trees and 139 different species of birds with sightings of humpback whales, dolphins manta rays and various schools of fish.

The growth of Tamarindo can be largely attributed to foreign investment. It’s beautiful surroundings, natural resources and oceanside landscape are attractive to many visitors and business entities. Getting to Tamarindo has become much easier than 20 years ago when a drive could take 7 hours and by bus, much longer. Due to the Friendship Bridge (Puente de la Amistad) which eliminated having to take a ferry across the Tempisque River and the improvement and international designation of the Daniel Oduber International Airport in Liberia, people could fly into Liberia instead of San Jose. Even if they did fly into San Jose, the drive to Tamarindo was reduced to less than 4 hours with the introduction of the bridge. Also of great importance is the ability to fly into the Liberia airport and then take a domestic flight directly to Tamarindo. These attributes coupled with a surge in the desire for the best internet Costa Rica has to offer gave this destination a viable place on the map for a plethora of investment opportunities. There’s a diverse selection of economic activity present that requires faster, better, stronger internet and support. The general infrastructure, businesses and future growth here rely on the Fiber Optic Internet Connectivity for Tamarindo that Itellum can provide.

Get Fiber in Tamarindo