San Jose: San José is without doubt, the most important political, economic and social center in Costa Rican. It is the CENTER for transport and telecommunications. Itellum has the largest capacity and infrastructure to offer our clients within the province of San Jose. We are the best business Internet service in the capital. 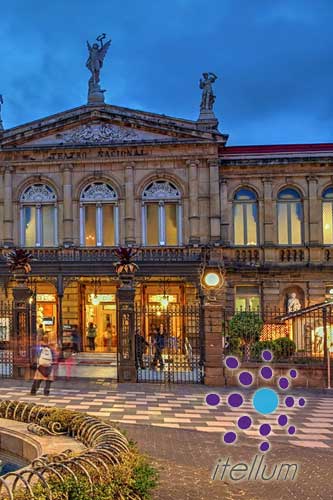 The capital city of Costa Rica and the largest city, San José, is situated in the middle of the country making it a natural transportation and telecommunications hub, center of economic and political activity, and the seat of the national government. Founded in 1736 and designated the capital in 1823, it has grown to a population of approximately 343,000 as of June of 2018. Like most Latin American cities, it has a bustling downtown, revitalized neighborhoods and some less than desirable areas. However, one thing is certain, and that is as the nucleus of the country it thrives on the best internet Costa Rica has to offer from iTellum.

Over a million people travel into the capital city almost every day, primarily to their workplaces to hundreds of companies located there. That represents the largest concentration of internet users looking to reap the benefits of the fastest & most reliable internet in Costa Rica served up by iTellum. Approximately two-thirds of the country’s population lives in the GAM or Greater Metropolitan Area. The area is made up of 11 districts; Catedral, Carmen, Hospital, Mata Redonda, Merced, Hatillo, Pavas, San Sebastian, San Francisco de Dos Rios, Uruca, and Zapote. There’s a lot of commerce in these areas and traffic can be unruly. Some of the intersections now have cameras monitoring key intersections and you can imagine their internet connectivity requirements include the redundant quality that iTellum is known for.

Always a commercial center, many of the old residential communities are experiencing new popularity as the older buildings are being refurbished rather than torn down. This can be seen in the district of El Carmen in the neighborhood of Barrio Amon. It is considered one of the historic neighborhoods, known mainly for its architecture of the late nineteenth and early twentieth century. It's one of the first elegant neighborhoods in which you can find houses and commercial buildings of the most varied styles. Victorian, neoclassical, and eclectic styles mix with the colonial style of homes such as adobe and bahareque. Currently, Barrio Amón continues to be a residential neighborhood, although much of the old buildings and houses have been converted into offices, small hotels, antique shops, cafes, bars, restaurants, and nightclubs, always retaining its original elegance. This upscale change in demographic gives way to the use of fiber optic connectivity for the myriad of users in search of superior internet in San Jose, Costa Rica.

Barrio Escalante, also in the El Carmen district, is another area that has evolved in a similar fashion. This is the home of the La Luz Gastronomic Festival and is a haven for foodies. The transformation of this area is the result of an intentional effort of the community to effect change. It is now one of the most “walkable” areas of the city with a plethora of restaurants and interesting shops all enjoying the best commercial grade internet Costa Rica has to offer made possible by iTellum.

A cultural departure and addition to the evolution of a pedestrian-oriented city is San José’s Chinatown. Formerly “El Paseo de Los Estudiantes”, it was transformed into a walking mall with a grand entrance arch and colorful displays of red and yellow signifying good luck and prosperity. It’s lined with Chinese restaurants, grocery stores, art galleries, unique businesses and residences, all in an advantageous position of having access to the best internet in Costa Rica. Connected to this is the Pedestrian Mall which extends about eight blocks including the financial district, the Plaza de la Cultura, the Pre-Columbian Gold Museum and National Theater. Along this walkway are street vendors, flower shops, and cafes which cater to the numerous employees of the businesses close by. The financial district continues to thrive here despite many companies relocating to areas such Escazú, Santa Ana and Curridabat. The Supreme Court is also close by and the internet via 1:1 international fiber optics offered by iTellum is a technological necessity.

Other attractions in the city center include art galleries such as the National Center for Arts and Culture which houses a collection of some of the finest contemporary art from the best Costa Rican artists. It is a vintage building which was once the National Liquor Factory and has permanent exhibits as well as performing arts centers and the Cultural Ministry offices. There are also several modern art galleries such as Galeria Andromeda, Galeria Roberto Lizano, Arte Latino and Galeria de Arte Amir, Galeria Namu amongst others.

The city center is also home to a wide variety of interesting museums. The Jade Museum, Costa Rican National Museum, and the Children’s Museum are just a small sampling of what exists. Oddly enough, the Children’s Museum was once San Jose’s principle jail! Converted to the museum in 1994, it has been developing throughout the years to offer world-class galleries and hands-on exhibits that focus on contemporary concepts in the themes of technology, science, culture, and literature. There is even an earthquake simulator and a showcase of what the jail was like years before it was converted to a museum which educates both adults and children alike. Obviously, a facility like this can benefit from iTellum’s faster, better, stronger Internet and support.

Move a little further west and you will encounter the Museum of Costa Rican Art in La Sabana Park. The park was once the international airport for 44 years until the Juan Santamaria International Airport opened. It is now the county’s most significant urban park with sports facilities, man-made lakes, running tracks, gymnasium, lush green spaces and the home of the National Stadium which opened in 2011. The stadium is the home of the National football team and a hub of other activities attracting major international talents and concerts. A top-notch complex like this fuels the existence of hotels, offices and government institutions. Some of the government buildings include ICE, the government electrical institution and the Comptroller General headquarters. The are several business center complexes housing an assortment of businesses and embassies. There is no avoiding the fact that an area such as this can benefit from the internet for hotels, call-centers and businesses, both medium and large provided by iTellum.

Since the opening of the stadium, the area called Mata Redonda which overlooks the grand facility has seen the development of high-end residential towers, office towers and small to medium size shopping malls. This neighborhood has been the home of past presidents of the country and has a diverse demographic. It is a most desirable area as it is in very close proximity to the center of San Jose and is the start of the main artery that leads to the Pacific beaches. Both residents and companies in the area can benefit from what iTellum calls the s Internet Concierge”. The company coined this phrase to describe their services to companies and organizations that are more interested in receiving the best service and support, rather than bargain services of other providers.

A second smaller international airport, Tobias Bolaños International airport is located in nearby Pavas. Its recent renovation has allowed aircraft from small fixed wing and helicopters to private jets. This airport also provides domestic service that companies, and individuals can utilize without having to go to the large main airport in Alajuela. This is also a hub for tourist flights, private charters, and aviation schools. When it comes to the redundant quality of iTellum, airport facilities and charter aircraft services benefit by not having to share their fiber optic internet connectivity with other users.

The city of San José is home to a large number of public and private hospitals. Hospital San Juan de Díos, The Children’s Hospital, The National Psychiatric Hospital, Hospital Mexico, Hospital Calderón Guardia, and others are all public hospitals located within San José. Some of the private hospitals in the area are Hospital Clinica Biblica, Hospital Metropolitano, Hospital and Clinica Catolica are used by both Costa Rican residents and visitors. These private hospitals are known for their excellent facilities, qualified staff, and state-of-the-art medical equipment. They are sought after internationally and attract people seeking both medical and dental treatment. Many of their services involve digital technologies utilizing the internet for their sensitive communications. The superior connectivity using iTellum’s internet via 1:1 International Fiber Optics assures efficient transfer of important data within the healthcare community.

As the capital city, San José is constantly reinventing itself, making it the nucleus of the country with development addressing the human side as well as the high-tech side. Although these two elements seem to oppose each other, when implemented with the intention to achieve a beneficial balance, they can work side by side to create a quality place to live and work.  Check now on availability of High Speed Internet at your San Jose, Costa Rica Location