Puntarenas: The city of Puntarenas is at sea level. The main economic activities of the city of Puntarenas are fishing, both artisanal and industrial, as well as tourism. This is followed by trade, services and some local industries. Itellum is positioned at an optimal level to meet any need for business Internet services 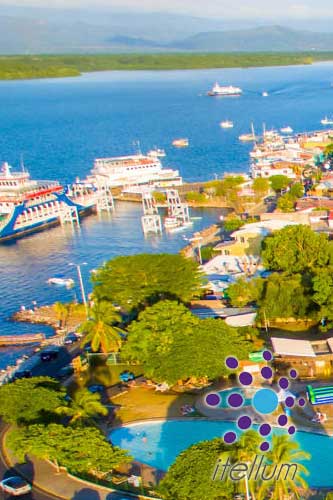 Which place has the best internet in Costa Rica? These two cities are often confused to be the same place, when in fact they are 28 kilometers apart. Puntarenas is the original Pacific port declared in 1814 and Puerto Caldera emerged as a principal port in 1981. The province and canton of Puntarenas are the most populated areas on the Pacific coast with over 350,000 inhabitants in the province and 136,000 in the canton. Made up of four districts, it has a unique geographical shape that is a long narrow peninsula and is responsible for much of the development of the country through its exports. Rich in history and traditional customs, Puntarenas was also the focal point for immigrants to enter the country and for tourism to bloom as far back as 1940.

A great deal has changed since those days and never has Internet via 1:1 International Fiber Optics been more important to the port traffic and cities of both Puntarenas and Caldera. Puntarenas is one of the most essential seaports in Costa Rica; the main exports include bananas, coffee, and processed fish among other products, which are made through the port of Caldera (under concession since 2006). In 2007, this port had mobilized 640,000 tons in containers, showing an increase of 63,109 TEUs (20-foot Equivalent Unit) to 169,827 (a growth of 168%) between 2006 and 2008. 13% of the country's exports and 28% of agricultural exports pass through this port. Primarily sugar, alcohol, wood and fresh products such as pineapple, melon, and cassava, are mainly destined for the United States. 62% of these products go through Caldera to China, Singapore, Argentina, Chile, and Peru. The magnitude of communication required for this activity begs for the fastest and most reliable Internet in Costa Rica made possible by iTellum.

Many industries that are involved in export production also make products for local consumption. Companies such as Sardimar, the large tuna processing company, and Alunasa that makes aluminum products for packaging, construction, air conditioners, and metalworking industries are located here. The Fertica Group, a fertilizer manufacturer and INOLASA, an organic product company are amongst the many small, medium and large businesses with their facilities strategically located here. These include ice factories, flour mills, sugar mills, fertilizer and chemical industries, sausages, dairy products, coffee roasting, slaughterhouses, animal feed, poultry industry, and the list goes on. Companies dealing both internationally and locally such as these, need what iTellum calls an Internet Concierge. Price is a consideration, but not a deciding factor in their decision to back their communications with fast stable internet. They don’t want to sift through a selection of internet providers that profess to supply the product they offer and then don’t deliver. They are more concerned about receiving complete services from start to finish including the redundant quality of the fiber optic connectivity provided by iTellum.

Fishing fuels a large part of the economy in this region. Puntarenas services about 90% of the regional fishing fleet. 96.5% of the fleet corresponds to craft boats, pangas, and boats, and 3.5% is dedicated to semi-industrial and industrial fishing. This represents about 3,500,000 kg of fish. Most of the catches are made in the Gulf of Nicoya (73.8%), which is comprised primarily of tuna and shrimp. Approximately 25.9% of catches nationwide are made in the Pacific zone. The estuary area is of important relevance for the economic life mainly of artisanal fishermen in the region that have influenced the development of numerous industrial fishing piers.

The first pier in Puntarenas was completed on July 4, 1913 (called "the pier"), which allowed the strengthening of the city's commerce with the Nicoya Peninsula. In 1927, a second pier ("the big beach pier") became one of the main coffee export points, making it the most important port on the Pacific coast. This pier was, for many years, an important source of employment in the city. In 1948 the first Chinese immigrants arrived on the coast of Puntarenas and construction of the breakwater embankments began. This stopped the strong tides from eroding the beach areas. However, the first cruises with tourists from other countries did not start to arrive until as recently aa 1998 when reconstruction of the doc and it's facilities fueled a revitalization of the city. Despite the renovations to the area, the 2,500-hectare estuary has remained the home of nutrient-rich algae, fish, mangrove crustaceans, crocodiles, turtles, birds, and various animals.

Puntarenas' metropolitan area starts in Barranca and continues to El Roble which also connects via road to the district of Caldera which is now Costa Rica's main commercial Pacific port. Many immigrants flocked to the port city from, China, Italy, Spain, Cuba, Venezuela, Panama, Guatemala forming a mix of these people and Afro-Caribbean descents which resulted in a rich mixture of races, customs, and culture. In 2016 the population of the city was approximately 123,000 and the diversity of its inhabitants still exists. This eclectic mix accounts for an interesting cultural ambiance. This is evident by the more than 25 sculptures of stone that line the Paseo de las Turistas and the boulevard of the open-air cathedral. An association of artists from the Puntarenas area incorporates talents in theater, dance and folkloric dance, painting, sculpture, and music to promote the local artists nationally and internationally. The commercial grade internet Costa Rica offers here communicates these artistic activities for the benefit of the participants and their audiences. Due to the geographical limitations of the narrow peninsula, there as not been much residential real estate development in the city of Puntarenas itself. However surrounding areas are beginning to be developed due to the proximity to the ports and fine beaches and the fact that it is only one hour away from San Jose and the Juan Santamaria International Airport. The addition of the new airport being built in Orotina is within minutes as well and that has spurred commercial and residential construction plans to be completed in the coming years. There is still a great deal of land in the areas around Caldera and Puntarenas, most of it agricultural and some of it belongs to long-standing companies that built vacation retreats for their employees years ago that are no longer being used. Some of these have clubhouses, pools and simple accommodations and some have independent homes that families have used for decades.

Although much of the colonial architecture has disappeared, some interesting historic buildings remain and some have been declared heritage structures. From the old Captaincy of the Port of Puntarenas, located at the beginning of the Paseo de Los Turistas which was built in 1930, the Fait House from 1925, the Church of the Sacred Heart of Jesus dating from 1902, to what is now known as House of Culture — one of the oldest buildings dating back to 1801. Amongst this setting is also the influence of the fruits of the ocean that forms the basis of the culinary scene here. The first culinary fair "Paseo Gastronomico" or Gastronomic Walk, held in July of 2019 was comprised of different restaurants that you can choose to walk to or drive and included delights from 15 local chefs. "The restaurants that will be offering their products have gone through a process of technical assistance with chefs and gastronomic specialists intending to enhance their traditional culinary offerings through innovation in their dishes, recipes, final presentation, among other aspects. We seek that visitors come ready to rediscover the gastronomy of the area," explains Flora Montealegre, Executive Delegate of the Costa Rica Foundation United States for Cooperation (CRUSA). However, if you intend to partake in a dish or two at each venue, the preferred choice would be to walk to burn off all those calories!

Also home to superior internet, the Puntarenas-Caldera area can be considered somewhat of a crossroads, and a gateway to the rest of the Pacific coast. Once you reach Caldera you have the option to go a bit further north to Puntarenas or still further north to Guanacaste or take a ferry to the Nicoya Peninsula. You can also go further south in the Central Pacific area or all the way to the South Pacific. One can also arrive via cruise ship and enjoy one of the many shore excursions in the area. It is one of the reasons that iTellum is the choice for internet for hotels and tourism businesses in the area. The area has long been a get-away attraction for Costa Ricans and a place that many families have traveled to over the years. Today there are far more hotels, bed and breakfasts, and other touristic venues and activities, and If you take into account the number of cruise ships that carry thousands of passengers per season, it's no wonder the area has increased in popularity. It's possible for just one ship to flood the port with two to three thousand passengers and from August 2019 until July 2020 over 115 cruises will visit the ports of Caldera and Puntarenas. That's not counting the crew members of these ships and the numerous freighters that enter the ports daily. These numbers amongst the many other attributes of the area substantiate the existence of faster, better, stronger internet and support that iTellums network delivers.