Ciudad Colon/ Columbus City is the number one district and the head of the Canton of Mora, in the Province of San José. Surrounded by mountains, the city is located on Route 239 and has the River Pacacua, near the University for Peace. Itellum also has an infrastructure in the area to provide the symmetric Internet service 1:1 International. 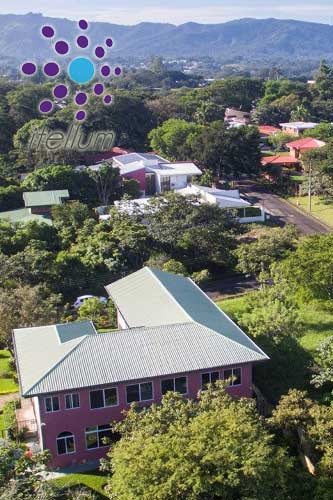 “Go west, young man”, is a phrase concerning America’s expansion westward. From a technological viewpoint, that can also mean the extension of fiber optic connectivity. And that’s exactly what’s happening in the Central Valley. Just west of the bustling communities of Escazú and Santa Ana is Ciudad Colón with it’s “down home” Costa Rican ambience and an appetite for superior internet brought to the area by iTellum.

As the principal town in the canton of Mora, it’s total population in all 6 districts is approximately 30,000. Ciudad Colón has a slightly warmer climate than it’s neighbors to the east and the surrounding nature and mountains make it a typical Costa Rican town setting which has been evolving over the past few years. The central park behind the church is the locale for many community and cultural events. The town center has small shops and several “typical” restaurants. These are not franchise operations but “Mom and Pop” businesses, many of which have been there for generations. The open market hall hosts a local farmers market every Tuesday with organic offering of all kinds. Known as the Feria Verde (Green Market), it offers local fruits and veggies, to homemade products and organic meats and poultry and enjoys visitors from surrounding areas to market and buy the wholesome goods. The surroundings are excellent for an outing with the family with hiking trails, mountain biking, horseback riding and bird watching.

However, now as you approach the town from the east you’ll find new strip malls with grocery stores, a variety of new shops, offices and new upscale restaurants. There are far more services here than there were only 5 years ago and with that comes the fastest and most reliable internet in Costa Rica. Although there are no large industrial complexes here, it is only 25 minutes from the international airport in Alajuela via Highway 27. For small to medium businesses this can be an opportunity to locate where the real estate is more reasonable and the commercial grade internet Costa Rica offered via iTellum makes it a logical choice.

The highway also enables residents easy access to industrial areas in neighboring cantons, Santa Ana, Escazú and San José that provides impetus for further development of residential neighborhoods. This makes it a reasonable decision for families to locate here because the commute is reasonable and the services in the area such as the superior internet are more than sufficient for most peoples needs. You’ll find everything from farms to estates to condominium complexes in the area. Strangely this small community is home to over 60 nationalities which could account for the diversity in housing and new development. With the areas population on the rise, it was necessary to improve healthcare facilities in the area. A new CCSS “government health” hospital by the name of Area de Salud Mora Palmichal was constructed recently and serves some 33,500 people in the surrounding area giving the population medical attention without having to travel into the city center. The ability to make medical appointments online is a convenience that is welcomed through the faster, better, stronger Internet and support available from iTellum.

The diversity of nationalities that make Ciudad Colón their home, manifests itself in some interesting ways. The Artist Colony is 17 acres nestled in a picturesque setting in the foothills which was established in 1998 by Dr. William White. It was built as a memorial to his children who died tragically; Julia who was an astrophysicist and accomplished poet and David, a highly talented composer and woodwind player. Such a legacy has been a haven, an inspiring environment for writers and artists of all kinds and the opportunity to explore their creativity in the peace-loving culture of Costa Rica. The 20-foot ceilings of the two painters’ studios contribute to the airy environment. There are three cottages for composers, writers or visual artists, a swimming pool and walking trails all in natural “green” surroundings. Since the colony was built, internet has become increasingly important to all types of artists and the redundant quality, best service and support of the internet here serves to compliment the imaginative talents that make this colony successful.

Another attraction that is supportive of the arts in Ciudad Colon is the Anfiteatro (Amphitheater) de Villa. A unique destination with majestic views perched on the edge of the canyon, a natural amphitheater, restaurant and a network of caverns, this is a marvel created by Belgian, Benoit Dressard who purchased the property not knowing what he would do with it. A rock quarry that was abandoned some 25 years ago, it was an eyesore that was not in keeping with its lush surroundings. His children had been playing a video/online game called Minecraft that is about mining, building and adventure, and this became his inspiration. The site has terraces, trails, tropical gardens with marble replicas of famous sculptures integrated into the extensive grounds. But the most fascinating element is the 500 meters (1640 ft) of tunnels 40 meters (131 ft) underground that lead to seven “cavernous” rooms that are used for special events. One can find statues within the caverns and tunnels, emerging from the walls or freestanding, replicating such famous works as The Thinker and Michelangelo’s David and Pietá. This is an excellent venue for concerts, outdoor events as well as business and private gatherings. Still a work in progress, it is a fascinating place to visit and explore.

Created by the United Nations under resolution in 1980, how appropriate that the main campus of the University for Peace is situated in such a peaceful milieu as Ciudad Colon. It is a dedicated institution for higher education in Peace and Conflict studies offering masters degrees and doctoral programs, and facilitating a variety of activities related to international peace and United Nations objectives. It has centers and offices in Addis Ababa, New York, Honduras, Geneva, Bonn, The Hague, Manila and Beijing, and numerous affiliates throughout the world in Africa, Europe, Asia that are active in distance education programs. With this type of global communication, internet in Ciudad Colon  via 1:1 international fiber optics becomes a necessity that is iTellums speciality. It is, in fact, the exclusive option offered by the company that prides itself in being what they refer to as an Internet Concierge. The University for Peace knows the value of having an internet service that delivers the actual product they request and not something that falls short. In other words, the university gets what they ask for without looking for bottom line pricing and are happy to receive superior internet that their organization thrives on.

Just next door to the University for Peace is the Parque La Paz (Peace Park), a 300-hectare forest conservation area and family park with several small lakes and ponds with ducks, geese, various bird species and butterflies. This perfect place for a picnic has ranchos, a play area for children, green areas and a labyrinth constructed of trees and bushes. There is also an area of monuments commemorating nature and peace. This park, as well as the El Eodeo Protected Area, is also home to deer, racoon, pizotes, Capuccin monkeys and various other animals. The surroundings are lush and picturesque making it a lovely one-day excursion for inhabitants of the central valley.

On the road to Puriscal hidden in the mountains above Ciudad Colon, is the Indigenous Community of Quitirrisí where the inhabitants preserve their spirituality and customs of more than 500 years. The paths that wind through the area lead you to ceremonial altars and tombs and give the visitor an insight to the people that once exclusively populated this area. Located close by is the indigenous community of Huetar that allows visitors to learn about their customs and natural medicines, and offers workshops about the cycle of life, sweet corn processing and the techniques used in their colorful handicrafts.

Exploring the area can not only be a fun adventure, but an education. After you’ve taken it all in you can stop in on the other side of town in Brasil de Mora just east of Ciudad Colon central and enjoy a cold craft beer and a bite to eat. This zone is home to Costa Rica’s Craft Brewery Company founded in 2010; a microbrewery involved in the exclusive design and production of high-quality craft beers. You can tour the facility and the overall operation is visible from a viewing area upstairs which also serves as a restaurant and often has live music. Their main product line includes Segua Red Ale, Libertas Tropical Golden Ale and Malacrianza Scottish Ale and is sold nationally.

If one considers the rich diversity of cultural activity in the area of Ciudad Colon, it is evident that the influence of the existence of the University for Peace contributes to the international flavor through its students, professors, visiting speakers and other employees. The artist colony attracts a creative contingent and the amphitheater encompasses a wide variety of arts and business. Add these elements to the indigenous communities and the longtime residents and throw into the mix the increase in residential development, and one has the makings of a multicultural, multinational town with the best internet in Ciudad Colon Costa Rica enjoys throughout the country.